Weymouth beach, 2 massive TV screens, and the Olympic Opening Ceremony streamed live to an audience of thousands. A real night to remember.

We parked outside town, and walked in along the seafront – which was a treat in itself. The view across the bay towards Weymouth is magical.

Weymouth holiday makers certainly look unusual this year: there were a couple of short haired joggers along the Esplanade who looked more Special Branch than tourist; and there’s the sailing crews, with their incredibly tanned skin, and crisp Team colours, who seem like super-beings walking amongst us. 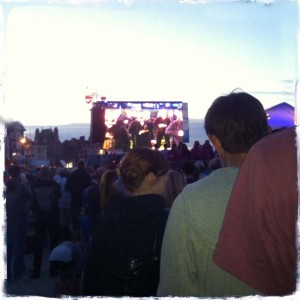 It was such a beautiful balmy night, we could have been walking in the Med, but once inside the Live Site, I’ve rarely felt so British. The atmosphere was incredible, and the ceremony itself was breath-taking. I was so impressed with what Danny Boyle put on for us – it showcased so many things we should be proud of as a nation; also well pleased to recognise most the songs being played, though Eldest Daughter had to point out Dizzee Rascal to me, and I returned the favour by supplying the name of the Sex Pistols when she asked.

I knew the words to a lot of the songs, so did the crowd, and we all sang to the National Anthem. Interestingly, no one, including me, seems to know the second verse. That can’t be right can it? I bet other countries know all the words to their anthems. But when I questioned the girls later, it occurred to me that the only time you hear ‘God save the Queen’ is at a sporting event, and we don’t watch a lot of those – apart from the FA Cup Final, or the World Cup – and now the Olympics. 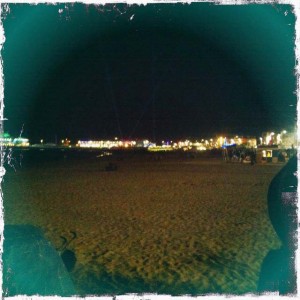 We missed the end of the ceremony, as we had a long walk back, but caught the fireworks on the beach, and we’ll catch up on what we’ve missed over the weekend – isn’t technology incredible?

Enjoy the rest of the Olympics, I’m sure it’s going to be amazing.