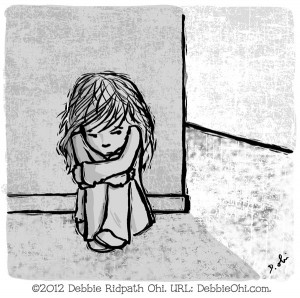 “Who are you talking to, my dear?”
Evie hugged herself tighter.
She didn’t want to talk to Aunt Freda, that’s for sure. Why else was she hiding here?
Duh!
Her Aunt looked down at her, and cocked her head on one side, like a curious parrot.
“Don’t like strangers huh?”
Then she took out a napkin filled with cake, and Evie watched from behind folded arms.
“There’s lots of food,” her Aunt said. “The Prodigal returns and all that.”
“Don’t care,” muttered Evie.
Anyway, Aunt Freda wasn’t a Prodigal, she was a Mad Old Hippy. That’s what Dad said.
The cake looked good though.
“So….are you going to introduce me to your friend?”
Evie glared.
They’d been making fun of her had they?
In front of the Mad Old Hippy.
She was so annoyed, she decided to let Bobby yank a picture off the wall.
It smashed on the floor in a lovely way.
“Ah,” said Aunt Freda, looking straight at him. “There he is.”
Evie sat up.
“And what’s his name, my dear.”
“Bobby,” she whispered.
“Nice to meet you Bobby,” said her Aunt, addressing the boy in front of her.
“You can’t see him,” said Evie.
“Well, of course not, my dear,” said her Aunt. “But Peter can.”
She reached her hand down to Evie, then cocked her head on one side again.
“Peter wants to tell you something,” she smiled.
“Apparently he and Bobby are going to be the best of friends.”